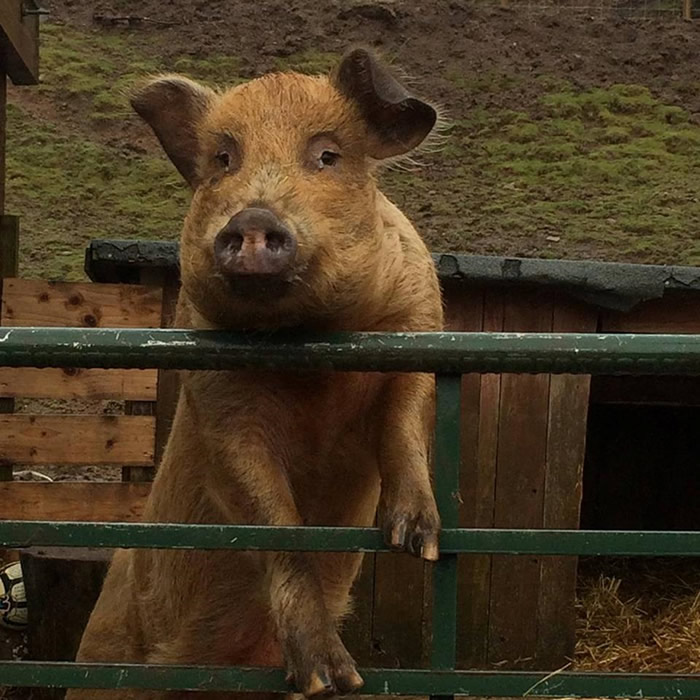 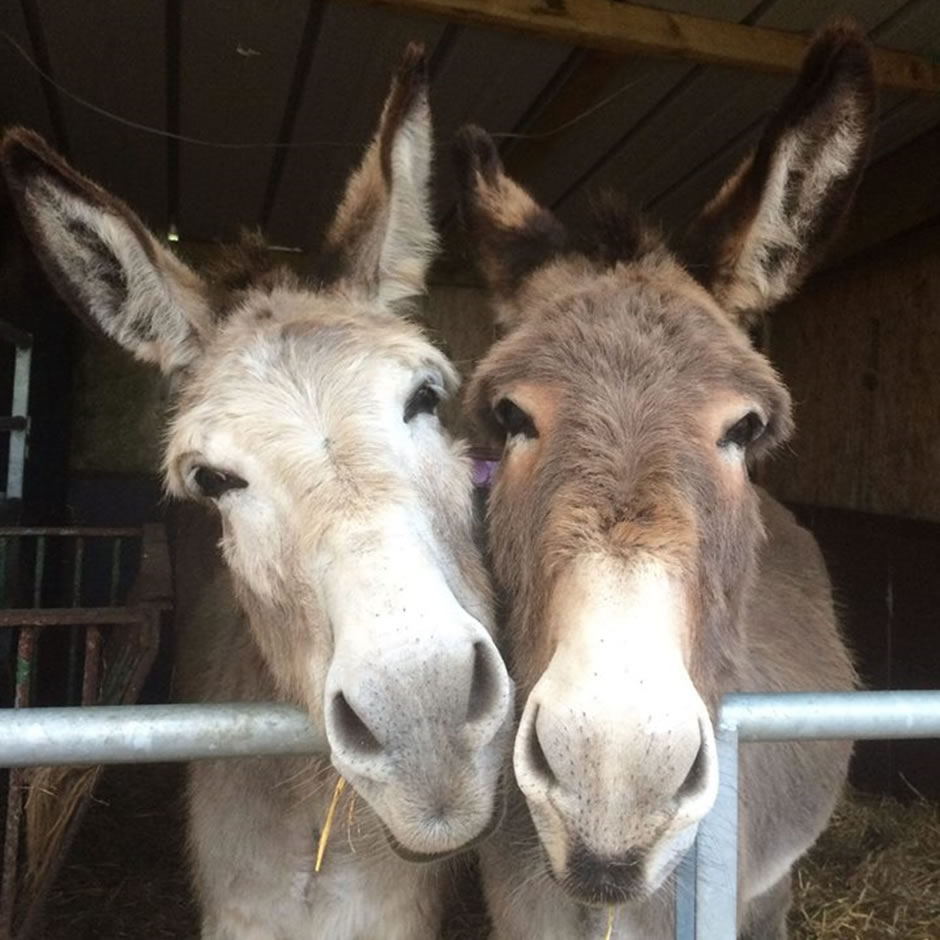 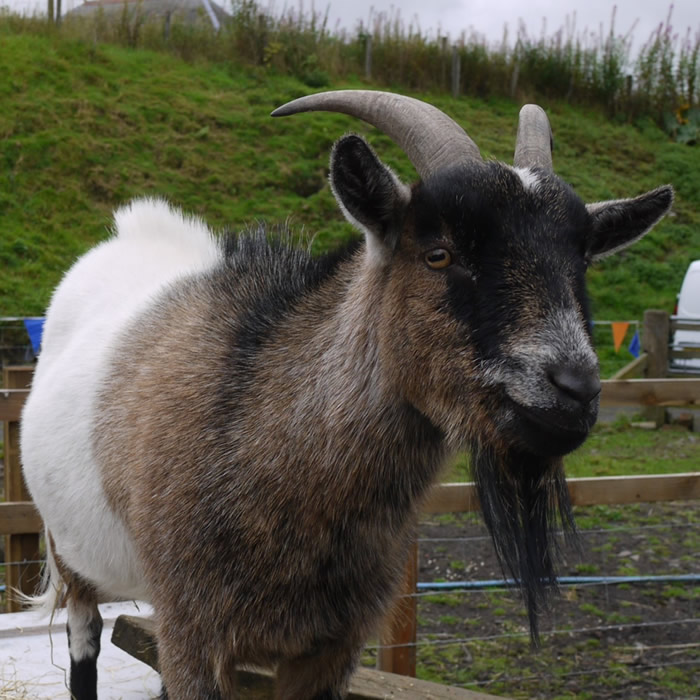 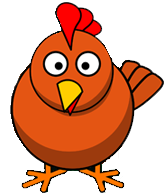 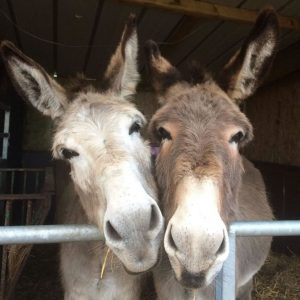 Along with Dotty, Jack and Victor were amongst the original animals which moved into the old brickwork site in December, 2012.

They are a comedy team who love attention and can often be found getting up to mischief!

They tend to lift anything that happens to be lying around, such as bags, books, feed scoops etc. So be careful not to leave anything in their reach.

They love spending time with their human friends and enjoy being groomed and fussed over.

They do not like being separated so you will usually find them together.

Victor sadly passed away in 2018. Jack was very unhappy for a while but Dotty and Paddy soon cheered him up.

Victor is sadly missed but gave us lots of happy memories. 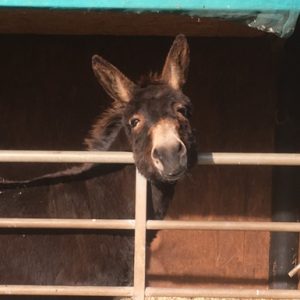 Seamus came on holiday to the Ark in June, 2019. He had lost his lifelong companion Paddy the Shetland pony and was very sad and lonely.

We thought some donkey friends would help him but it turned out they didn’t get on too well.

However, Seamus is very happy living with certain ponies – Andy, Fudge and Effie as well as Billy the bullock. An unusual combination but it seems to work.

Seamus still belongs to his owners who pay towards his keep, farrier, vet etc.

He loves visitors and likes to smile for the camera! 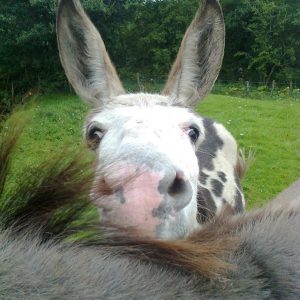 Dotty moved to the old brickworks site in December, 2012, along with Jack and Victor.

Dotty likes to keep a watchful eye on the boys although she enjoys spending time with the other donkeys. She prefers to be with Jack, making sure he doesn’t overstep the line although she has been known to encourage him to try and break into the hay shed!

Dotty loves spending time with her human friends and being groomed. When her summer coat comes in she has even more dots to show off. 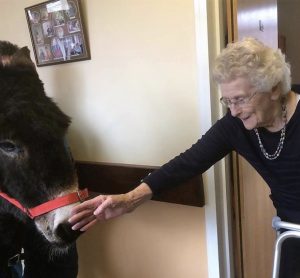 Paddy came to live at the Ark in January, 2016. Due to ill health, Paddy’s owner was looking for a home where Paddy could go on loan. Paddy came to the Ark and settled in very well.

Paddy now has a permanent home at the Ark with all his animal friends.

Paddy is very sociable, he loves being groomed and is happy to leave the others and stay with humans all day long! 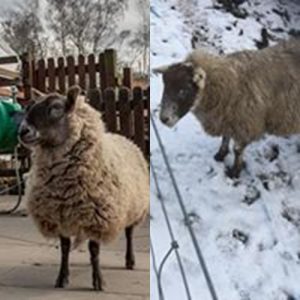 We have two sheep at the Ark, Susan and Barney.

They were pet lambs donated from local farms.

They both know their names and usually come running and shouting when you call them.

Barney is the strongest and doesn’t like anyone standing in his way if there is food around!

Susan is a little shy but quickly comes closer if she thinks that Barney is getting something past her.

We also remember Sooty and Hettie two of our sheep who sadly passed away.

They are sadly missed but left us with lots of lovely memories. 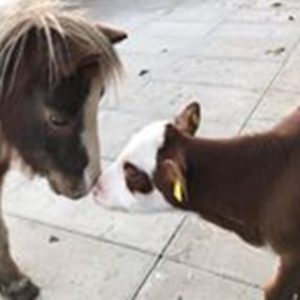 Billy came to live at the Ark in October, 2018. He was donated from Conrick Farm. Billy had a bit of a rough start in life. Being small he was bullied by the other calves and came to the Ark so that he could have his bottle of milk in peace.

He is still small for his age but is very friendly and usually shouts back when you call his name.

Pictured above with his friend Fudge. 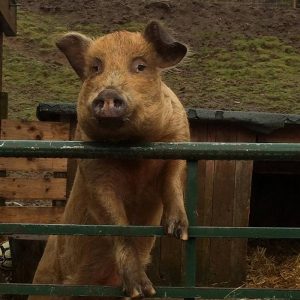 Percy was found next to the road, picked up by the authorities and was placed at the Ark for seven days.

Following the seven days he has become a permanent fixture at the Ark.

When you visit Percy please DO NOT put your hands near him as he might think you have food for him.

Percy is also able to jump up on his gate so please DO NOT lean over or stand too close to his gate.

You can see him better from up the back track.

Look at the photos below to see how much Percy has grown! 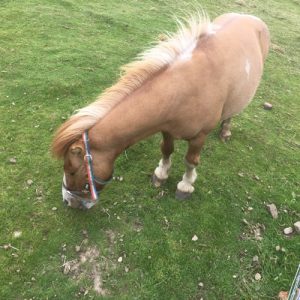 Eddie and Tommy were amongst the original ponies which moved to the Brickworks in December, 2012.

Wee Ted also moved with them but sadly Ted had to be put to sleep in June, 2015.

Ted was quite well known locally and many people may remember him.

Fudge came to the Ark  when his owner, who had cared for him over many years, developed health problems.

His previous owner still visited while she was able and Fudge came running as soon as he heard her voice.

Andy joined the Ark due to a change in his owner’s circumstances. Andy’s small back legs are bent but he is checked regularly and can gallop and buck as much as the others when he wants to.

Rosie and her daughter Esme came to the Ark in April, 2015, when a change of circumstances meant that their owners had to move house.

Rosie’s son Romeo joined them later that year after the people who had bought him lost their grazing for him and he had to be kept inside all the time.

Romeo is a little nervous but once he gets to know and trust you, he is very friendly. He doesn’t like any sudden movements

Effie came to live at the Ark with her daughter Gladys in May, 2019.

Sadly, Gladys passes away in September but her memory lives on in her Mum.

All the ponies love visits and attention from their human friends. They also loved being groomed and have been known to fall asleep whilst being brushed. 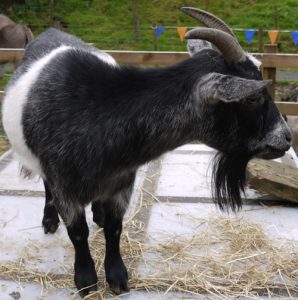 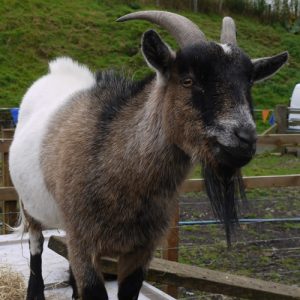 Bunty and Biffy came to the Ark in 2013. Biffy was just a baby and Bunty was a year older. In the early days, Bunty was the boss and she wasn’t long in putting Biffy in his place. As they grew up the tables turned and Biffy is now the leader and Bunty seems to do  as he tells her.

They don’t like to be separated and enjoy spending time climbing and jumping on their mini playpark.

Bunty and Biffy like visitors but be careful as they have sharp horns that they sometimes put through the spaces of their fence.

Biffy also likes to try and knock fences down with his horns! 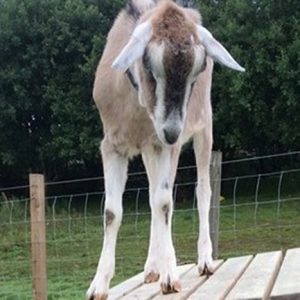 Benny came to the Ark along with his friend Frankie in    2016. Sadly, Frankie died and as the two of them had always been together, we were worried about Benny being left on his own.

However, the only problem that arose, was that Benny wants to be with humans ALL the time. This has resulted in him being in a stable, when there is no one around, as he has been known to jump the fence and try to follow folk home!

Benny loves visits from his human friends and appears to enjoy being with people more than being with the other animals. Although he does like to spend a little time with Susan the sheep.

We have twelve hens living at the Ark. They have all been rehomed with us for various reasons.

We have ten ducks living at the Ark. They have also been rehomed with us for various reasons.

Georgia and Gavin live together. Donald still lives with his duck friends.

Two beautiful doves were donated to the Ark. Their names are Marjorie and Michael.

We have two rabbits (officially) living at the Ark. Their names are Ronnie and Peter.

Ronnie lives indoors and Peter lives in a large outdoor area on the way down to the yard. Peter shares the area with Eric and Ernie the guinea pigs.

We used to have several wild rabbits that came for bed and breakfast and were very tame.

Unfortunately. they all caught the horrible disease myxomatosis. Despite the pet rabbits being vaccinated we sadly lost Jerry the rabbit to the disease too.

We have ten guinea pigs living at the Ark. Jigsaw, Coco and Grace live in a large outdoor area. Eric and Ernie live next door with Peter rabbit.

If you whistle going past their home, they quite often squeak back to you.

Indoors we have Scott and David and Nikson, Minstrel and Dixie. They sometimes squeak when they hear visitors coming in the door.